2011 is going to be the year of the new recipe.  At least once a week I’m vowing to try a new recipe.  I have tons of cookbooks that don’t get regular use and I’m always coming across yummy-sounding recipes on blogs.  Plus, I keep getting more cookbooks for Christmas (I got two this year) or I buy them (a lot of the time; I even collect vintage ones).  And with trying to lower my grocery budget, cooking more at home and being aware of what I’m going to make for the week will help the process.

Technically, I just came up with this idea last night, but this past week we did try a new recipe, so I’m going to start with that.  I got a new, larger Crock Pot for Christmas and with it I got this book: 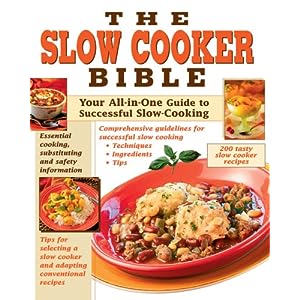 The idea behind the new Crock Pot is that our family is getting bigger and the small one wasn’t cutting it anymore and also, Chris is home two days a week with Ellie and he should be able to get something going in the slow cooker so dinner isn’t so time-consuming for me.
I bought a two pound shoulder roast at the grocery store and then Chris found a recipe he wanted to try.  He said “Beef with Apples and Sweet Potatoes” (page 64)﻿ sounded like something his Grandma Graham would have made and he also thought with the apples and sweet potatoes that it would be a sweet dish.  Personally, it sounded gross and I didn’t want him to make it, but we’re just starting the process of him making dinner and I didn’t want to shoot him down on the first try…we’ll save that for later.
From now on I’d like to take pictures of the new recipes when they’re done, but since I’m doing this one in hindsight you’ll just have to take my word for it that it didn’t look good at the end.  The apples turned to mush and the only identifiable part left was the peels.  It was all too brown for me and I’m not really a fan of canned sweet potatoes.  But Chris liked it (Elliott just ate the beef) and that’s all that matters for the first try.  I don’t think we’ll make it again though…and we didn’t save the leftovers.  It wasn’t a sweet dish (obviously) but Chris expected it to be sweet and sugar-y (gross!) and was disappointed when it wasn’t.
Next up, chicken and dumplings in the Crock Pot.  All my recipes won’t be in the Crock Pot, but it’s new and I want to break it in.
« new year’s plans
May I Suggest… »