This weekend we got to “decorate up the tree” as Elliott so eloquently put it. As we were eating dinner (see above for yummy visual; recipe here), Chris informed me that there would be no nice, pretty, color-coordinated tree this year.  This was heartbreaking.  And, truthfully, it kind of made me itch just thinking about a mismatched tree.  Issues.

Normally, we put up two trees.  The one in the basement has all the kid ornaments and random ones we have from our childhoods.  The one in the living room, that everyone sees, is the nice one.  It matches our decor and all the decorations are pretty silver, green, and white.  It makes me happy (and not itchy).
But we decided one tree is plenty and so the living room tree is it.  And Elliott had already gotten a glimpse of the random Tigger and Scooby Doo ornaments and she would have been crushed if I told her we weren’t going to put those on the tree.  Ugh.
Then while I was unpacking the Christmas totes, I found a box of bulbs I bought after Christmas last year that don’t match anything, but since we were throwing all rules out the window, I decided we’d use those too.
So our tree is up.  A day later than normal, enough random color to cause a seizure, and loved by the resident two-year-old.  Success.  Sweet, sweet success. (The mess that is decorating up the tree.  Harper eating toys, Ellie watching Veggies Tales Christmas, and Chris running to Walgreens to buy lights because last year, in a fit of rage, I threw away all the lights while taking down the tree…and forgot all about it until we were trying to decorate it.  #1 mom.) 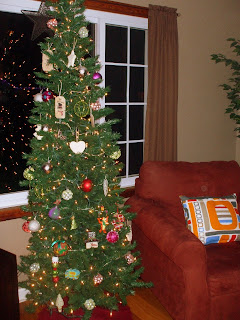 (The Christmas books, puzzles, and coloring books only come out with the Christmas tree.  They’ve been gone just long enough that Ellie doesn’t remember them and thinks they’re new…until she sees someone has already colored in the books and yells, “hey, someone colored in my book!” and I have to explain that she colored it last year.  Then she says, “ooh, when I was a baby.”) (The Grinch and Max the dog reindeer will be spending the next month with us also.  Living mostly on the couch, they will be played with, slept with, and probably eaten by the dog…and then get to rest until next season in a nice, safe Rubbermaid tote in the basement.)
Hope you had time to get your tree up this weekend!
« twenty eight
twenty nine »