We went to the orchard, picked apples, bought pumpkins, drank apple cider slushies.  It was epic fall fun.
To complete the cute family moment, we were supposed to carve pumpkins.  Elliott was supposed to get all messy, Harper was going to love playing in the pumpkin goo, and I was going to not get messy, take some pictures, and, afterwards, clean up whatever chaos was left as Chris took the babes off for their baths.  This is what I had envisioned.  It would be a nice, calm, fall evening.  After everyone was clean and in bed, I would make pumpkin seeds and relax.
Instead, this is what happened: Elliott got to draw her pumpkin’s face–she did a really good job! Harper puts everything in her mouth so no pumpkin fun for her.  Instead, she gets a teething biscuit.  And promptly shoves it in her ear.  Good thing baths are on the agenda.

This was the only time Ellie touched the inside of the pumpkin.  She didn’t like the feel of it.  Awesome. 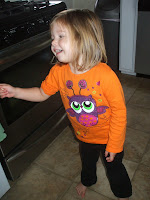 It’s completely safe that she was dancing with a chopstick, right? Right.
Pause to make sure Daddy’s working hard… And now on to some light reading while Daddy continues. Oh, good, he’s done.  Let’s all get together and pretend it was a group effort.