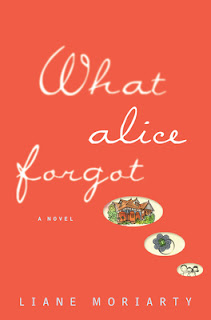 In What Alice Forgot by Laine Moriarty, Alice loses ten years of her life due to memory loss.  And ten years is a really long time (yes, I just had to tell you that).

She wakes up one day at the gym, apparently after taking a spill during spin class.  And instead of getting ready to turn 40, she thinks she’s pregnant and getting ready to hit 30.  So as she discovers this life that she didn’t know she had, she’s shocked at how things turned out.  And appalled at who she’s become in the ten years she doesn’t remember.

I read this book while on vacation with my family.  It was a perfect lazy-day read and got me through some long morning on the bike at the gym.  I don’t know if it was that or the escape I needed from my family, but this book really stuck with me long after I put it down.

Thinking about losing ten years of my memory, I tried to remember who I was ten years ago.  And, guys, it wasn’t pretty: the guys I dated, the things I drank, the places I went, the lack of sleep, the “friends,” the things I thought were important.  Mary at 30 is so much better than Mary at 20.  Thank the Lord.  (I’m also really thankful that Facebook, MySpace, and Twitter weren’t around when I was in my late teens and early twenties.  Thinking about the things I would have posted makes me cringe.  There’s a lot of younger people I wish could hear that message and cool their jets on posting things on the internet.  But then again, they probably wouldn’t listen just like I wouldn’t have. Sigh.)

So the book follows Alice as she tries to learn who she was and what she has become.  And meanwhile she fixes some relationships that got messed up.  And learns about the three kids she had.  And finds her way around this big, beautiful house that she lives in sans husband now.  It’s all shocking to her and slightly heartbreaking to the reader to see how things have turned out.
But then things start to click again and Alice remembers the pain, the betrayals, and the strained relationships.  But her point of view is different this time and some things start to change.  She figures out what’s truly important and what isn’t.

I didn’t always like Alice while reading this book, at times I felt she was too needy and other times she was just a bitch.  But when she starts to piece together a new life with fragments of her old one, the reader begins to love Alice, the good and the bad parts.  I really enjoyed this book and while I don’t think it’s for everyone, I do feel like the older you are, the more you’ll relate.

« when it’s all said and done.
before the rooster crows. »