Fall is the best.
We crammed in every fall activity we could this season.  It’s been exciting.
And Halloween was no exception. We roamed the streets of Beech Grove with Abby Cadabby, a plump, pink kitty, a cute skunk, and a giant baby. 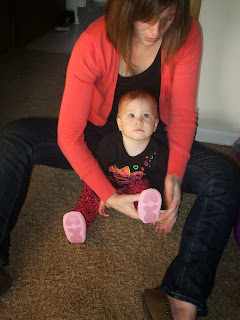 Adie played herself as Giant Baby and Harper was the second Graham baby to be a skunk.  Here’s the original skunk, way back in 2009.

Elliott and Reagan could not contain their excitement.  This was the first year Halloween and all it’s awesomeness was fully understood.  It was fun to watch.
They ran from house to house giddy with anticipation (and already on a sugar high), yelling trick-or-treat before they were even on the house’s porch.  For the most part, the adults stayed on the sidewalk or on the road and the big girls went to all the houses by themselves.  They definitely thought they were hot stuff. As the evening went on, Elliott’s costume became unhooked at the bottom.  It attached with velcro like a onesie between her legs and the more she ran, the less it stayed together.  So by the end, her giant cat onesie was flopping open like a big kid diaper.  She didn’t realize or care.  But a group of adults at one house could not handle the floppy-crotch kitty.  Elliott ran up their yard excited for candy and yelled, “Hey guys!”  as they laughed uncontrollably at this odd child.  It was one of the finer moments of the evening.
After about a block and a half, we went home to feast on chili, peanut butter sandwiches, lots of sweets, and warn apple cider.  Then Reagan and Ellie got to hand out candy for the rest of the evening.  You’d think that would be a downer for them, but they just as enthusiastically passed out candy as they accepted.  And my ever-polite daughter told every other kid that she liked their mask, their dress, their sword, etc.  Another fine moment of the evening. As the trick-or-treaters started slowing down, Chris took over candy duty with Elliott.  One little girl came up, got her candy from Elliott, and then turned to Chris and asked if Elliott was his sister.  I’m not sure who should be insulted by that stupid question, but we should have taken that girl’s candy back.  Or given her two small Tootsie Rolls like Chris did for the middle schooler that told Chris to smell his feet.  That’ll show you to mess with the hand that feeds you.  Suckas.
It was such a fun evening.  It makes me sad on a daily basis to see my babies getting so big.  Elliott’s in preschool and Harper sits up and says “Dada” already.  Time needs to slow down.  But evenings like this, surrounded by family, I’m okay with kids getting bigger and babies not being babies anymore.  But if things slowed down, that’d be okay too.
« {pre}school house rock
what we ate on halloween »